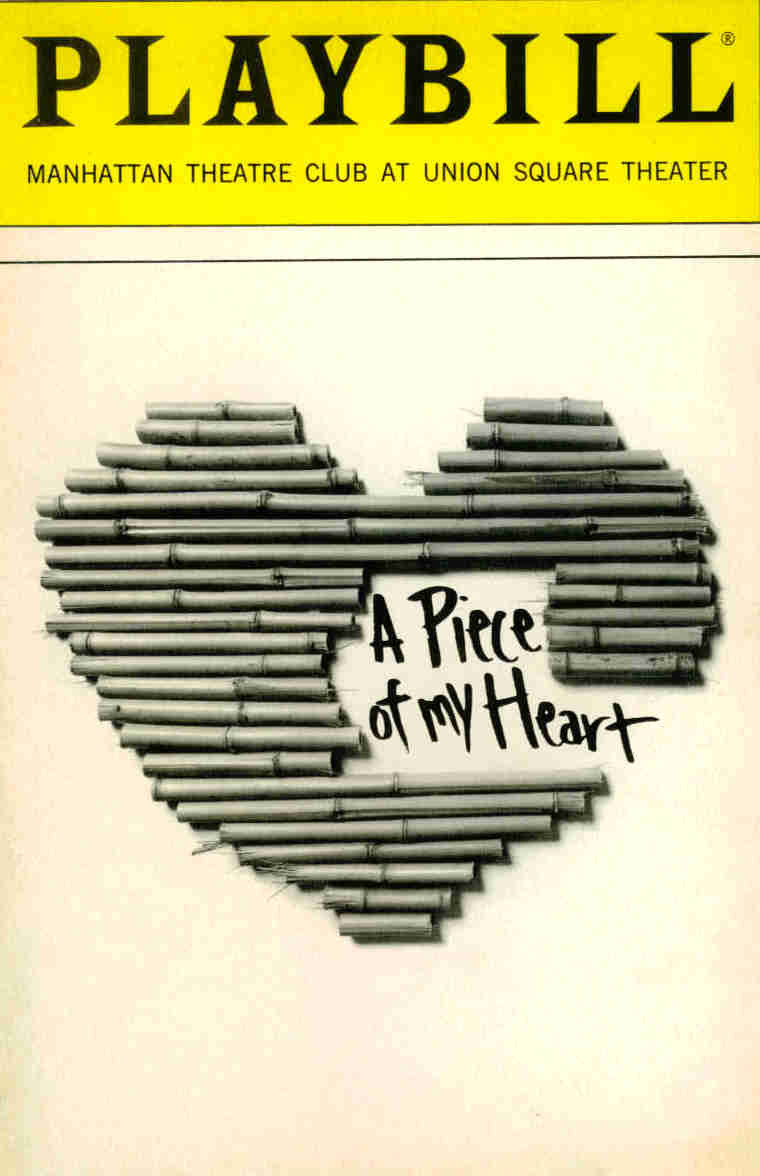 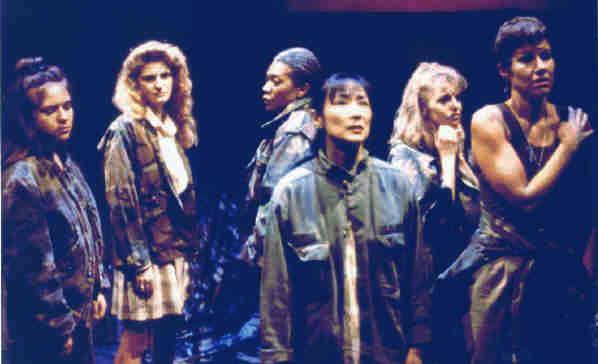 MARTHA: "A piece of my heart goes with each GI!" 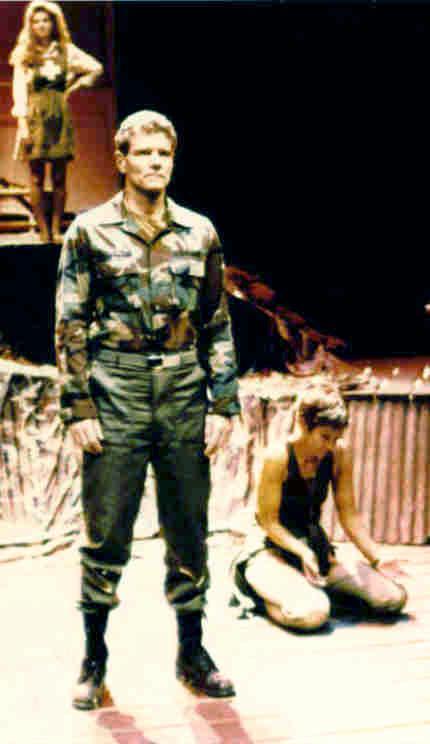 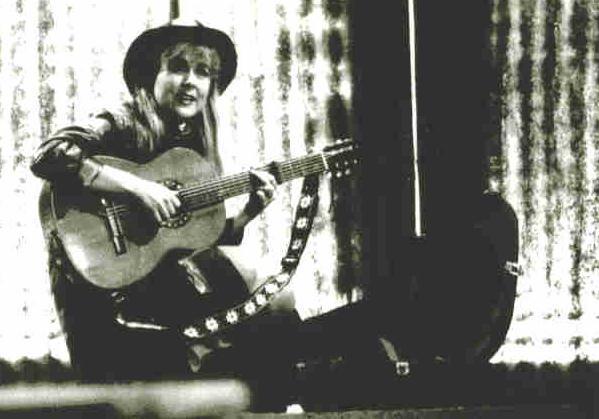 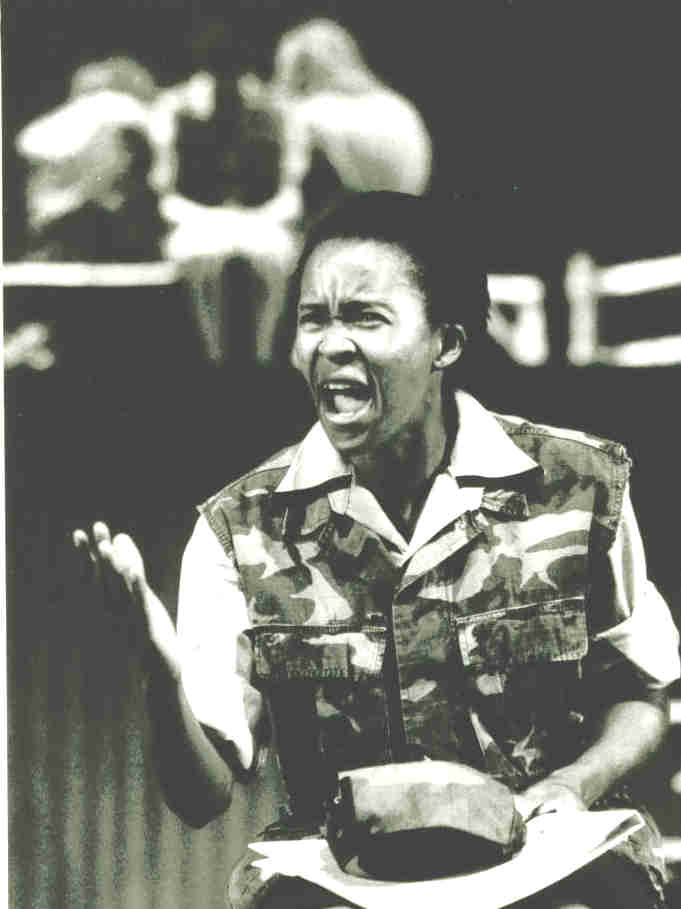 STEELE: "Same thing is happening...setting up another no-win situation!" 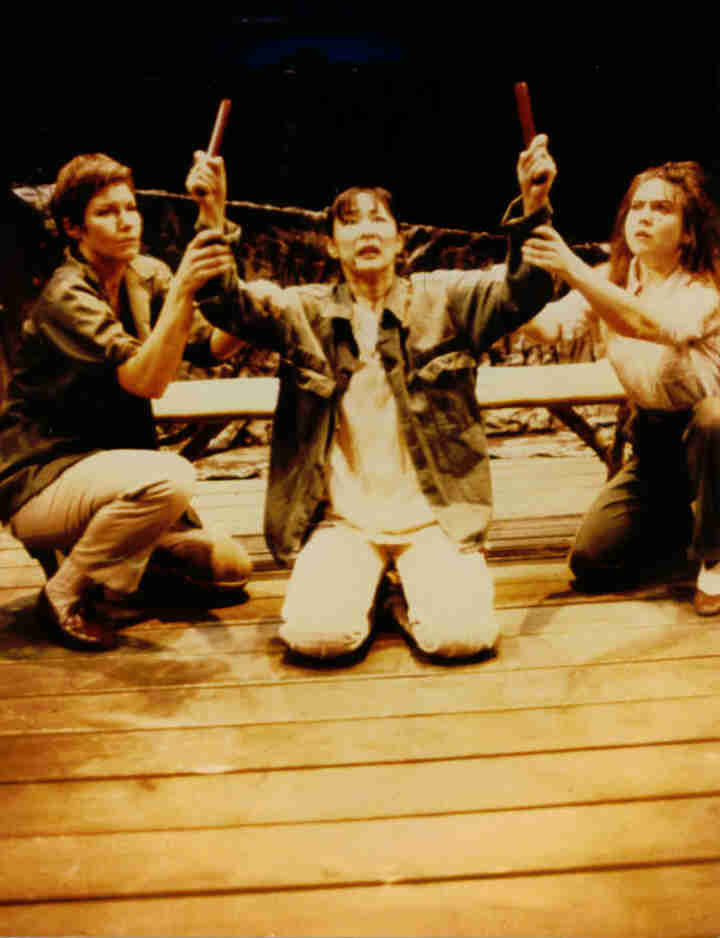 SISSY: "Something holy is being transgressed here."

A PIECE OF MY HEART

"The play, A Piece of My Heart, by Shirley Lauro, has become the nation’s most enduring theatrical production that deals with the Vietnam War."
-The VVA Veteran
The Official Voice of Vietnam Veterans of America, Inc. ®
An organization chartered by the U.S. Congress 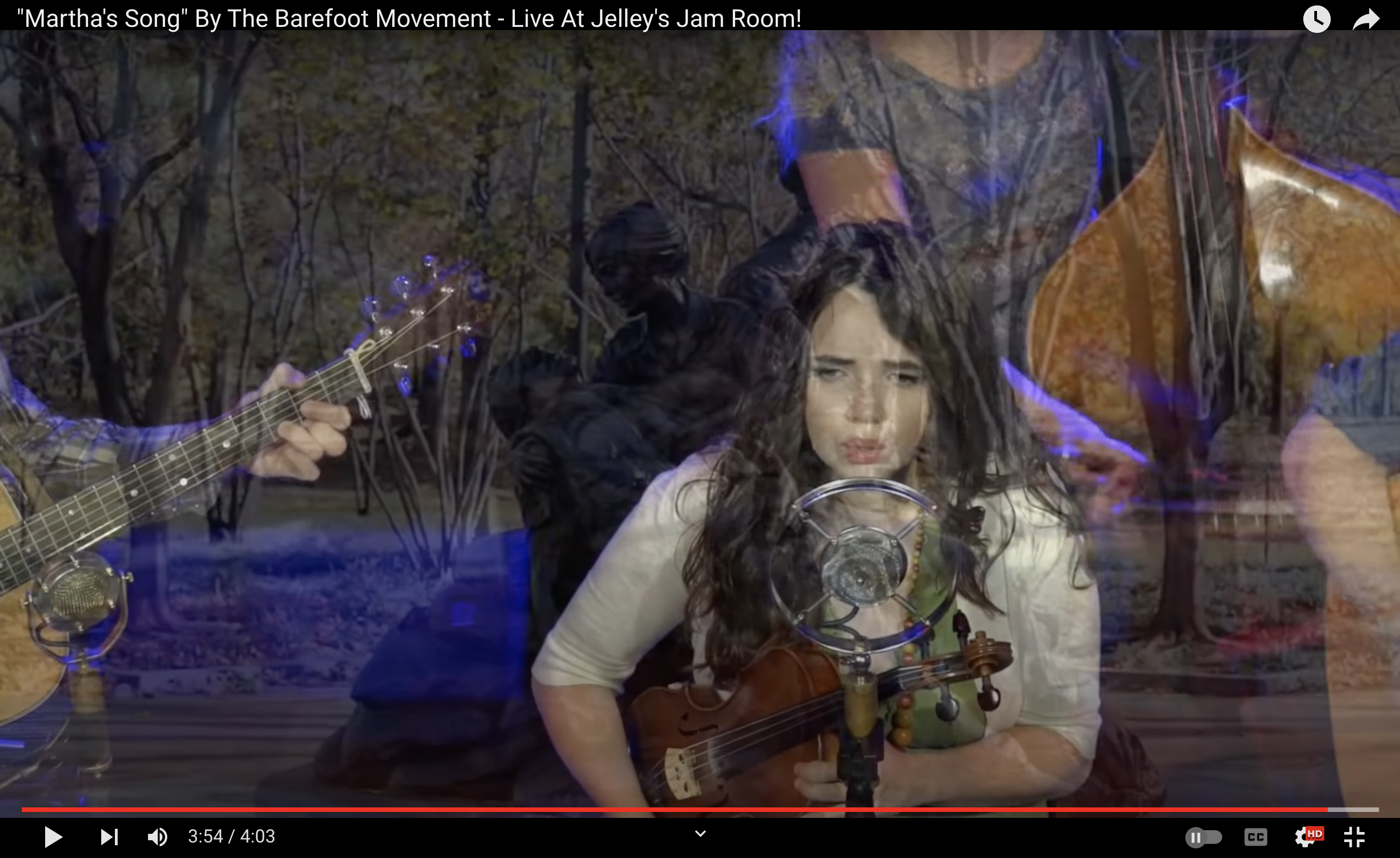 A live recording of "Martha's Song" by The Barefoot Movement, inspired by the book and the play "A Piece of My Heart," which chronicles the stories of women who served in the Vietnam War as nurses, Red Cross volunteers, army officers, and USO performers.
The book is by Keith Walker and the play is by Shirley Lauro. Martha herself was a combat nurse, but the song is for anyone who has experienced the trauma and after-effects of war. 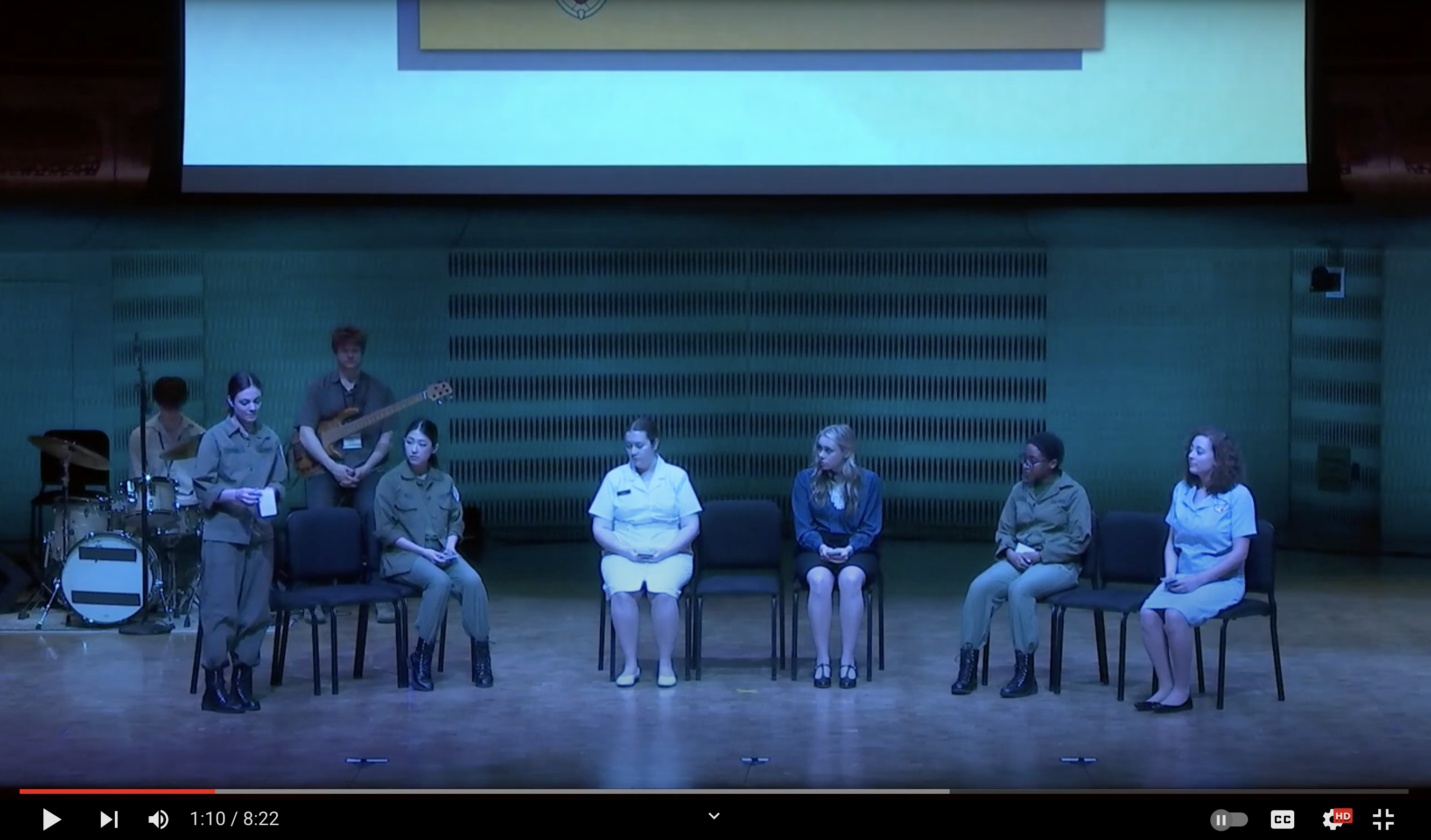 PLAY OVERVIEW:
The true stories of six courageous women sent to Vietnam and their struggle to make sense of a war that irrevocably changed them and a nation that shunned them. A work with the music and soul of a tumultuous era in our history.
1m; 6w.

OF INTEREST:
A PIECE OF MY HEART has enjoyed over 800 productions, both in America and abroad. In the 2005-06 season, the play will enjoy professional productions at Atlanta's Theatre-in-the-Square, Moolelo Productions, San Diego, and Theatre Unbound in Minneapolis. Among some of the most interesting productions have been a Command Performance in Washington, D.C. when the statue to Vietnam Nurses was dedicated and a production at the Gates of Arlington Cemetary at the 10th Anniversary of the Statue's dedication; a Memorial Day production by L.A. Venture West Theater outdoors at the L.A. Vets Cemetery; and a South African production where Ms. Lauro, sponsored by The Natal Performing Arts Council and the U.S. Information Agency, attended the premiere and lectured on the play at the five major universities of Natal.

REVIEWS:
"...Shirley Lauro's new play A PIECE OF MY HEART, is a catharsis as well as a coup de theatre...There have been a number of plays dealing with Vietnam...but none with the direct, emotional impact of Ms. Lauro's work...(she) has turned first hand impressions into a disturbing drama that evokes empathy for survivors as victims."
-The New York Times

"Vietnam drama sparks...Surprised audiences...brought them to tears with sobs filling the auditorium and a standing ovation at the finish...drawing on the experiences of women in the Vietman War, Shirley Lauro's A PIECE OF MY HEART found solid dramatic context on the stage..."
-Variety

"A PIECE OF MY HEART...takes up a subject largely missing from the reams of material written about Vietnam, namely the women sho served there...seamlessly interweaving the stories of the six principals...the play is exceedingly moving as the women gather at the memorial wall in Washington and experience a heart wrenching expiation---one that also affects those watching them from the audience...in not straining for a hit, the (theatre) may have produced one in A PIECE OF MY HEART."
-The Wall Street Journal

"Shirley Lauro's cathartic...rousing...skillfully dramatized...creating an exhilarating sense of reconciliation and triumph. Ms. Lauro was able to take disparate characters and create a complete narrative from their stories, no small task."
-Christian Science Monitor

"A PIECE OF MY HEART...one of the most compelling and valuable (plays) yet written on a subject...rarely treated with such straight-forward authenticity...mercurial staging...separates the soldier from the politics of his mission...needs to be seen now."
-The Detroit News

"In A PIECE OF MY HEART...there's what amounts dramatically to an almost religious expiation---a final recognition of what actually went on in Vietnam and afterwards..."
-The Irish Times